Here’s One Way To Write A Novel (Part 2): Three-Act Structure 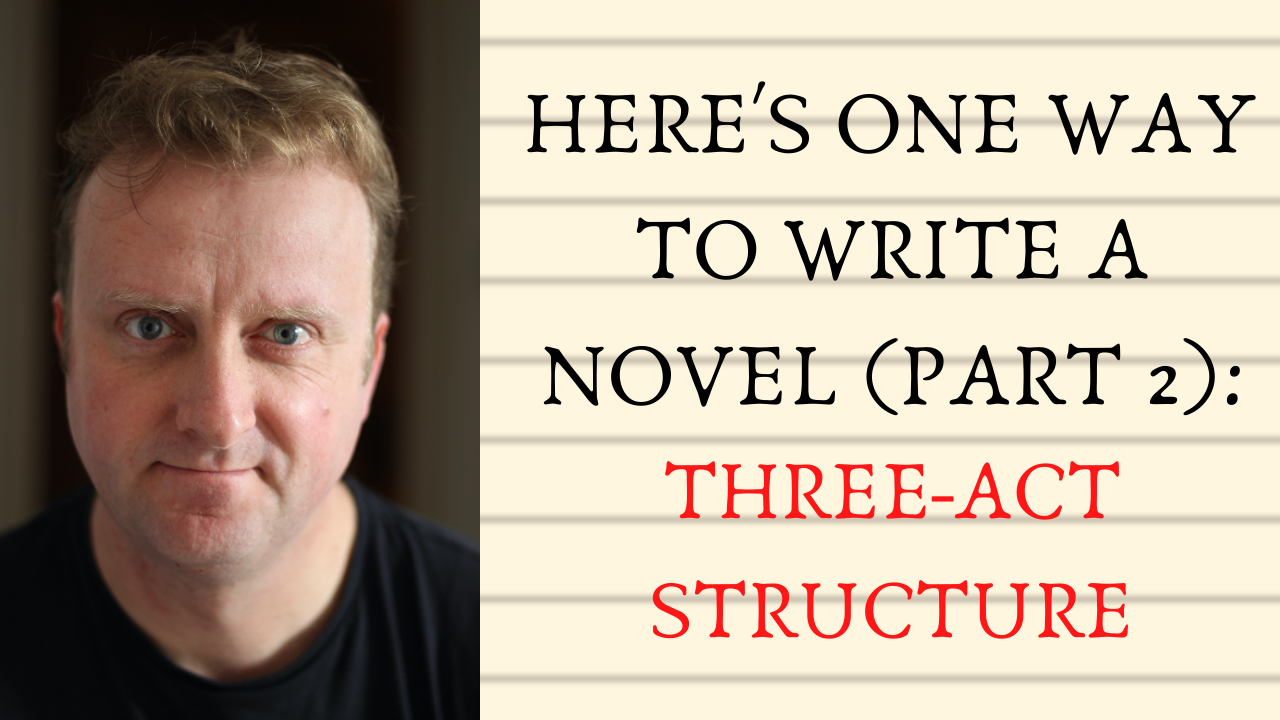 I’ve just hit 22,000 words on my new novel, and this is where things can get a bit sticky. To make our way through the muddy middle of a novel, it helps to understand the basics of three-act structure, so here are a few pointers…

And here’s the thematic video I mention… https://youtu.be/vD64WDtWsV8

Hello, folks. It’s been a couple of weeks since the last update. Since then, I’ve had a haircut and my first vaccine and I’m just getting over the side effects…

I’m still using the same method to write the first draft of this book, so scribbling in a notebook one day, then switching to the laptop and bringing it to life the next. And it’s been working pretty well so far. I’ve just hit 22,000 words, which is about a quarter of the way through this book. I want it ultimately to be somewhere between 80- and 90,000 words tops. So I’m about to hit what is possibly the most difficult part of the novel.

The second act, the muddy middle. As I said in the first video, and I’ll pop a link below if you haven’t seen it: https://youtu.be/A9u0SFjv3N8 — openings are relatively easy. Everything’s exciting. The world is your oyster. But when you get to the end of the first act, your characters will have started making choices that have consequences. Story consequences. So how do you navigate this? Well, let’s take a moment to talk about the basics of structure. All stories have this in common: a beginning, a middle, and an end. This is the three act structure at its simplest, used by the ancient Greeks in their storytelling, still used by Hollywood today.

Now, you may have read all sorts of fancy stuff about four-act, five-act, seven-act structures, pyramids, diagrams, all sorts of stuff. But in the end, it all comes down to these three essential beats: a beginning, a middle, and end. And why are we even talking about acts? We’re writing a novel. Well, this is largely because the language of theatre and screenwriting has seeped into the bigger conversation about narrative. But it really does help to think of your story in these terms, not least because an understanding of story structure will help you identify the strengths and weaknesses of your writing and enhance your self-critical skills. Here’s a simple breakdown of how the acts work. So, Act One is all about the set up, and that’s what I basically just completed. I’ve introduced my main characters. The setting, the themes, the tone and the rules of the story are established. There will be some kind of incident that will trigger the story and set the protagonist on the path of the story. The First Act usually ends with a turning point that will launch Act Two. Act Two is all about confrontation. Your protagonist will be tested as they strive to achieve their goal, the action rises and rises, leading to a midpoint that then becomes a crisis. The final events of Act Two, which often herald disaster or certain failure for our hero, will trigger the events of Act Three. Act Three is all about resolution. The stakes are raised to the point where we think it’s going to end in disaster. But the protagonist will take the lessons learned by the tests of Act two and find a resolution. They will almost certainly have changed from the person they were in Act one. And that’s it. The building blocks of story.

You can apply this not only to your overall story, but to each chapter which will have its own beginning, middle and an end. So this is what I have ahead of me next. Act Two. This is where I test my characters like an Old Testament God making their lives increasingly difficult. The good news is I have a pretty good idea of how I want Act three and the ending to pan out. So I just need to bridge that gap with some fun shenanigans.

And if I get stuck, then I need to take a moment just to think thematically. I covered that in a previous video… https://youtu.be/vD64WDtWsV8

Again, I’ll pop a link below. Sounds easy, doesn’t it? Hmm. I’ve just written a scene where they come to a door and I have only the vaguest idea of who is on the other side. So, yeah, we’ll see. It’s never easy. But here goes. There’ll be another update a couple of weeks and until then, happy writing.