The Development of The Crow Folk 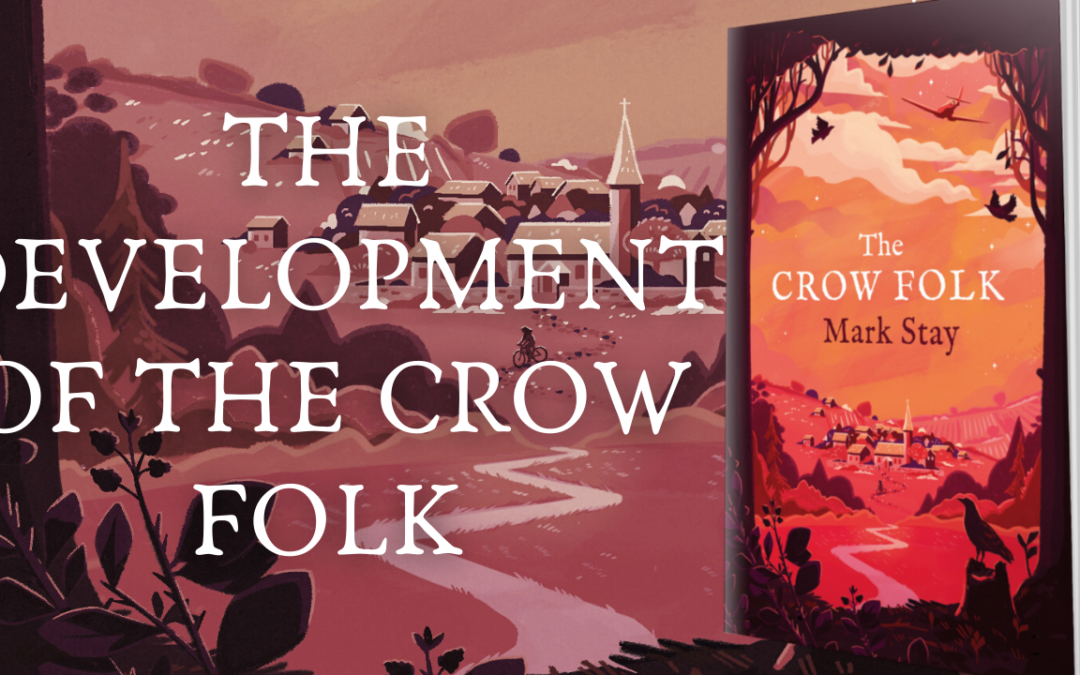 How long did The Crow Folk take to develop? A lot longer than you might think. In this second part of the highlights of the Bestseller Experiment podcast, I talk about false starts, rewrites, junking old versions, nearly self-publishing, and how some notes from my agent changed my mind.

Hello, folks, welcome to the second part of the highlights from the episode of the Bestseller experiment, we talked about all about this thing.

And in this one, we talk about the development of the book, how long it’s been swishing around in my mind, versions that I got rid of, how it was nearly self published. And we feature notes from my editor. All of this in about eight, nine minutes. It’s jam packed. So do please enjoy…

That’s really what I wanted to ask as well. Mark, a bit about this come up a lot, actually. And people are very curious about how the book was developed. And and Mike Revell,
thanks for your question. Mike, he said, I’d love to know more about your writing process for the book. Now, if I’m if I’m not mistaken, this book was written with the two
hundred word a day challenge, wasn’t it?

Yeah. But this this was well, the thing is, I had as I said, I had entire drafts of scripts and novels dating back over 10 years and I just got sick of rewriting the same thing over and over again.

You just what you just chucked it all away?

Yeah, very little of those… The village is the same, the name of the village, some of the magical background, but essentially most of it’s gone. Did you actually go through a process as you as you were archiving those notes of saying, what am I going to keep from this? Or was it just..

Yes, yeah. But you kind of think, OK, what’s evergreen? What’s what’s going to… What’s the good stuff? And there wasn’t a lot of it, although one of…The story might come back for book four or five if I get there, you know, because that there’s something about that story that I do want to come back to. But it will be told from Faye’s point of view, not the creature’s point of view. So because I was going for kind of a Swamp Thing vibe with with the original and it just didn’t work. And anyway, so so I had I had all these old drafts and pretty much all of it was jettisoned.

So interesting. And so how did you how did you kind of go through the process from initial notes to outline and draft? Mike asks.

Well, it was because it’s the first in a series, I kind of saw it as a bit of a superhero origin story. Faye finds magic, learns how to use it against a terrible foe, her first real test as a character. And I spent a little time making sure I had the main characters right. I kind of discovered where I wanted her to be by the end of the book, and I did pretty much jump into it. So it wasn’t… I didn’t outline very much. I’d outlined The End of Magic heavily, as you know, Back to Reality. We outlined heavily because we were working together. This was this was much lighter. Now, I was… I’ve been prepping this all afternoon, so I did try and find notes and it’s been quite hard to find where I made the switch. I basically started this in December 2018. That was the point where I think I jettisoned all the other stuff, looking at the different old Scrivener files, you know, so and that draft, that, that first draft I found is pretty similar to what’s been published. And also the other thing is I had planned to self publish, inspired by our own Ian W Sainsbury, friend of the podcast, award winning author. I was going to do a quick release, three novellas, Boom, boom, boom, because and I think what helped was mentally, I was thinking, okay, these are going to be short about forty five, fifty thousand words,
so just jump in and have fun. And I did. I had loads of fun.

So that was, that was the thinking behind that one.

And how many words in the book One? you remember how it turned out.

There’s a little story behind that. And Rhoda asks a question later on about how… Because I got to about forty five in the end it ended up at about sixty five. So still quite short.

But actually Rhoda asks she says, I heard the book started out as a novella and ended up being a full book. Is that right.

So how did you go about extending it.

Good question. And I did dig out my notes. I’ve got my email from Ed. So let me let me read you…

Ed being your agent, correct?

Ed Wilson, the lovely Ed Wilson. And this is great. So I and I said to him up front, I want to self publish this, but have a look at it and see what you think. And I got his email. He said nothing too major, but all ties into my big point. Why is this book only forty five thousand words? Woodville is completely effing brilliant. And he has, bless him, starred out out the “uck” there. He says tonally, tonally spot on.

Just in case it ever got read out on a podcast.

Yeah, he says tonally spot on, perfectly realised, structured and paced, deliciously readable. This is cozy fantasy. The genre mash up we didn’t know we needed the characters zing off the page. You develop a real emotional connection in such a short space of time. I was in pieces at the end, you bastard, which is great.

And we’ve talked about the praise sandwich on here before. You know how you give criticism. You start with this is good. You know, there’s a but coming thundering over the horizon. OK, so he says but there is sooooooo… I think there’s seven O’s in that so and it’s all in caps. So that’s more you can do because you’ve limited the work and you don’t have time to properly establish the setting before you get stuck into the plot. We need to see more normal village life, more Dad’s Army war preparations, more vicars and oversized veg and tongue in cheek Archer’s style village politics before the talking pumpkins appear, or rather before the villagers see the talking pumpkins. The way you’ve written it, we have the big reveal and the fantastical events go above ground within the first third of the book. And in a book this length that’s too soon, you’re giving up too easy and losing the fundamental tension of what is and isn’t real. Who is and isn’t barmy. When you have more twists and turns, more tension around who and what Faye, Charlotte and Mrs Teach … Those are the witches… Are. You can keep structure and tone the same. Fundamentally, that doesn’t have to change. Just add more tension, intrigue, spooky goings on. Sow seeds for future books. And then once you’ve established the series, you can do pretty much what you want. This first book is vital to establish the series. You’ve got to properly establish it. Book one is too important to have it dismissed as just a novella. So this was great. And I had a manuscript from him marked up all the way through with notes all the way through. So that was my jumping off point to answer Rhoda’s question. It was, you know, the the tension, the questions. I was kind of giving it all away too quickly and just dig a little deeper as a result.

So I’ve got a I’ve got to say, you know, that is the reason why you try and get an agent, because so many people think so many think agents are just, you know, you give given the book and then they go and flog it. You know, they go off and they have a beer or a glass of wine with with their connections. And then they try and sell the book over lunch. But people don’t realize that good agents are your best friends and your best, you know, constructive critics as well. And it sounds like, Ed, at that point in the journey really gave you the crossroads to say, look, these are all the things you can do without. I mean, if somebody is self publishing without an agent, for example they wouldn’t have known where to go at that point. They may have just put it out as a forty five thousand word self published and missed out on what potentially could have been the most incredible ride of their life. So that’s absolutely fantastic. And what a great insight as well to hear that stage of the journey at that point. Absolutely brilliant.

Thank you, folks. Really hope you enjoyed that. All sorts of fun stuff coming up in future episodes, including how I worked with historical language. Writing a book without any swear words. That’s a first for me. I’m comparing my different publishing experiences. So that’s know working in crowd funding and self publishing and traditional publishing, looking at how those all work and all sorts of other good fun stuff. So do please subscribe and I’ll see you next time.